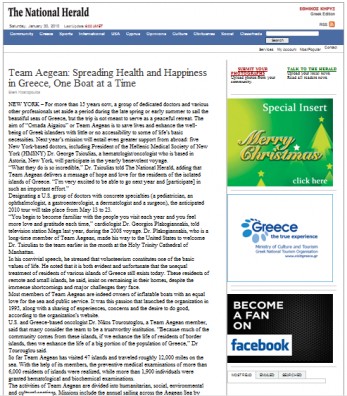 Team Aegean: Spreading Health and Happiness in Greece, One Boat at a Time

NEW YORK – For more than 15 years now, a group of dedicated doctors and various other professionals set aside a period during the late spring or early summer to sail the beautiful seas of Greece, but the trip is not meant to serve as a peaceful retreat. The aim of “Omada Aigaiou” or Team Aegean is to save lives and enhance the well-being of Greek islanders with little or no accessibility to some of life’s basic necessities. Next year’s mission will entail even greater support from abroad: five New York-based doctors, including President of the Hellenic Medical Society of New York (HMSNY) Dr. George Tsioulias, a hematologist/oncologist who is based in Astoria, New York, will participate in the yearly benevolent voyage.

“What they do is so incredible,” Dr. Tsioulias told The National Herald, adding that Team Aegean delivers a message of hope and love for the residents of the isolated islands of Greece. “I’m very excited to be able to go next year and [participate] in such an important effort.”
Designating a U.S. group of doctors with concrete specialties (a pediatrician, an ophthalmologist, a gastroenterologist, a dermatologist and a surgeon), the anticipated 2010 tour will take place from May 13 to 23.
“You begin to become familiar with the people you visit each year and you feel more love and gratitude each time,” cardiologist Dr. Georgios Plakogiannakis, told television station Mega last year, during the 2008 voyage. Dr. Plakogiannakis, who is a long-time member of Team Aegean, made his way to the United States to welcome Dr. Tsioulias to the team earlier in the month at the Holy Trinity Cathedral of Manhattan.
In his convivial speech, he stressed that volunteerism constitutes one of the basic values of life. He noted that it is both evident and unfortunate that the unequal treatment of residents of various islands of Greece still exists today. These residents of remote and small islands, he said, insist on remaining in their homes, despite the immense shortcomings and major challenges they face.
Most members of Team Aegean are indeed owners of inflatable boats with an equal love for the sea and public service. It was this passion that launched the organization in 1995, along with a sharing of experiences, concerns and the desire to do good, according to the organization’s website.
U.S. and Greece-based oncologist Dr. Nikos Touroutoglou, a Team Aegean member, said that many consider the team to be a trustworthy institution. “Because much of the community comes from these islands, if we enhance the life of residents of border islands, then we enhance the life of a big portion of the population of Greece,” Dr Tourouglou said.
So far Team Aegean has visited 47 islands and traveled roughly 12,000 miles on the sea. With the help of its members, the preventive medical examinations of more than 6,000 residents of islands were realized, while more than 1,900 individuals were granted hematological and biochemical examinations.
The activities of Team Aegean are divided into humanitarian, social, environmental and cultural sections. Missions include the annual sailing across the Aegean Sea by boats, including the ambulance sea craft “Minas E”, and a two-day campaign on the islands, engaging in  medical tests and interventions, and the installation on each island of medical and technological equipment.
The equipment consists of medical instruments, modern portable diagnostic equipment, recorders, and medical supplies. In addition, Team Aegean has provided and will provide for the construction of football fields, playgrounds, school sites, and gyms; it offers educational, pedagogical, cultural, recreational and athletic equipment at all school levels (such as school furniture, books, toys), shadow theater performances, concerts,  preventive medical examinations and interventions. Health services are supported by the medical department of the group, which has more than 15 specialties, including: Internal Medicine, Cardiology, Gynecology-Obstetrics, Pediatrics, Orthopedics and Child-Orthopedics, Oncology, Pulmonary Medicine, Dentistry, Neurology, moral support, Dermatology, Urology, ENT, General and Plastic Surgery, Vascular Surgery and Microbiology in adults and children.
Team Aegean is a non-profit organization, established legally in 2001, which supports services to improve the quality of life in Greece.
For more information on Team Aegean, visit http://www.omadaaigaiou.gr/.